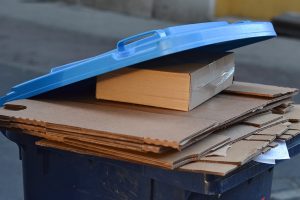 Recovered fiber end users continue to experience impacts from fluctuating recycling markets, which they discussed in their recent earnings calls. Stakeholders also speculated on the future of fiber exports to Asia.

Below are some of the top recycling-related takeaways from the paper company earnings calls.

Quality output overpowers cheap feedstock: The potential for U.S. mills to incorporate more recovered paper, given the historically low prices for many grades, has received significant attention in the recycling community. But one paper company explained a barrier to its increased use of recycled fiber.

Packaging Corporation of America said between 15% and 18% of its fiber use in containerboard mills comes from OCC. And despite the low and falling OCC prices, cost is not the only consideration when it comes to input choice.

“We’re not going to sacrifice our performance in the marketplace for our customers for what potentially could be a very-short-term gain on OCC,” he said during the company’s April 24 call.

OCC collection cost outpaces revenue: OCC prices in the first quarter averaged $75 per ton, down from $107 per ton in the first quarter of 2018, said Julie Albrecht, chief financial officer for Sonoco Products, a packaging company that also operates a recycling division. The company, which held its earnings call April 18, is anticipating a year-long average of between $50 and $60 per ton. Robert Tiede, CEO of Sonoco, correctly predicted that OCC prices would continue to slide moving into May, explaining that he was “not sure it’s hit bottom yet.”

Although multiple companies declined to give specific collection cost figures, a Sonoco official acknowledged that OCC prices are “well below” the cost to collect the material. But that’s where municipal contract renegotiations come into play again.

“We’re seeing a lot of different changes in behaviors with regards to our work with our customers in municipalities in which we collect, where we’re having to have a different discussion about those options,” said Roger Schrum, Sonoco’s vice president of investor relations and corporate affairs.

Still, given the ongoing downward trend, one analyst queried whether the financials of OCC could get to the point where companies cut back collecting the material. Tiede offered a firm “no,” pointing to Chinese demand for recovered fiber.

“We’re seeing Chinese investment in old mills and they’re looking to convert those to create pulpable material that they can ship back and, if you will, work through the environmental issues of us sending OCC over,” he said. “So I don’t think that collection will be curtailed.”

Contract changes are growing ubiquitous: The largest haulers in North America have been talking about the contract renegotiations they’ve undertaken with municipal customers. Some of the paper companies that also provide recycling collection services described taking the same actions.

Tiede of Sonoco said his company is “de-risking” curbside collection by “pushing some of that risk back to the municipalities.” He noted this is an industry-wide trend and framed it as a return to Sonoco’s earlier days in recycling when the company first started collecting materials other than paper.

Paper products and packaging company Cascades, which is also a recycling hauler, is beginning to charge a service fee for collection rather than relying on revenue from commodity sales. The company held its earnings call on May 9.

“The revenues that are not coming from the selling of the OCC or the fiber will obviously have to come from somebody else and that’s going to be the generator,” said Luc Langevin, president and chief operating officer of Cascades’ specialty products group. He estimated that this practice will bring the company’s materials recovery operations “back to profitability” by the third quarter.

China’s total ban could benefit U.S. packaging producers: The ability to ship recovered fiber into China in 2020 and beyond is still a big unknown. The Chinese government has repeatedly expressed its intent to ban all “solid waste” imports beginning in 2020, but it’s unclear what exactly falls into that category and whether that will include relatively clean recovered paper.

But industry insiders are theorizing a few possible outcomes if scrap fiber can no longer enter China, and one possibility is Chinese companies will be forced to substitute unprocessed recovered fiber with finished paper products. That means U.S. producers could see a growth in demand in products such as linerboard, a component of containerboard.

“I definitely think that’s a scenario that’s very likely to play out,” said Jon Painter, CEO of equipment manufacturer Kadant, which supplies machinery to paper mills. “The capacity that they’re adding in Southeast Asia really won’t be there in time if, in fact, China goes through and has a full ban by 2020. So they will need to import liner from North America and Europe.”

Painter added that the Chinese government could delay the all-out ban. But “if they do what they say, I would say that there should be some increased exports to China,” he explained on Kadant’s April 30 call.

Chinese mills continue their buildout in other countries: As containerboard producers in China reel from the ongoing shortage in recovered fiber imports, major players are aggressively investing in other countries to secure their fiber supply.

Painter said Malaysia has “recently emerged as the hotspot for investment with two of China’s larger containerboard producers recently announcing plans to add nearly 3 million tons of new capacity over the next few years.”

Meanwhile, producers in China are taking downtime, both because of the fiber shortage and the slowing Chinese economy, he said.