Not much light at end of mixed-paper tunnel 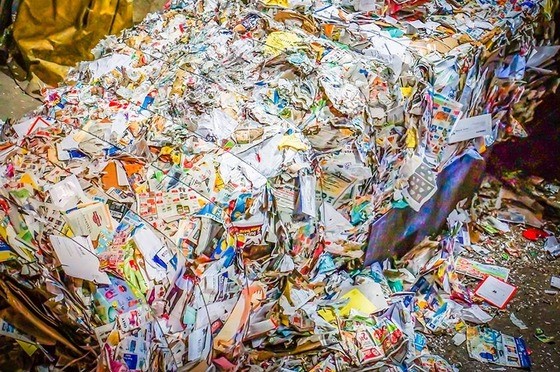 North America’s residential mixed-paper prices are deep in the negative numbers in some areas. That pain will likely persist for some time, one analyst predicts.

“It’s going to be many years before we get back to a decent market, a robust market,” said Bill Moore of fiber recycling consulting and research firm Moore and Associates.

A low-grade product, residential mixed paper generally consists of OCC, ONP, office papers, mail and mailers and paperboard/boxboard products. Depending on the region and local markets, mixed paper can make up a quarter of the weight handled by MRFs, but its value is currently averaging nothing to negative across the country.

Moore and Associates estimates that, in 2018, at least 500,000 tons of mixed paper were collected for recycling but were landfilled instead.

Moore presented at WasteExpo in Las Vegas in May about mixed-paper markets, covering shifts in international trade, the interplay of mixed-paper and OCC markets, efforts to reduce contamination and domestic mill investments.

Moore noted that, even before China effectively shut the door to mixed-paper imports, the material had been bordering on chronic oversupply in North America for decades. In the 1990s, the bale price for mixed paper hovered around a quarter of the price fetched for OCC.

Around the turn of the millennium, China began consuming more mixed paper, driving prices upward to as high as 60% of the price for OCC, he noted. Chinese mills were being built to consume mixed paper with as much as 5% contamination. After around 2000, very little mixed paper was being consumed by U.S. containerboard mills, with the exception of those owned by Pratt Industries, he said.

“China has this really strong influence on the mixed-paper market. They made it,” Moore said.

In the first quarter of 2017, mixed-paper shot up to over $100 a ton. But China’s National Sword policies began to take effect in summer 2017 and the market for mixed paper began to fall apart, Moore said. “China changed the market dynamic almost overnight,” he said.

Now, other countries are restricting imports of mixed paper: Taiwan banned mixed paper imports, Vietnam is enforcing a 2% prohibitives (non-paper contaminants) limit, and Indonesia initially announced a 0.5% limit before dialing that back to 2% in mid-June.

“China has this really strong influence on the mixed-paper market. They made it.”

Indian mills are smaller and older than Chinese mills, and they just can’t handle any additional material, Moore said. Two Chinese companies just announced major mill products in India, which will result in a large change, however.

In the past couple of years, total domestic demand for mixed paper has increased but not enough to offset the reduction in export demand.

Facing significant market pressure, U.S. MRFs are working to reduce contamination in their mixed-paper bales. Operators have produced mixed-paper bales with an average of around 5% prohibitives. Moore pointed to 2% as a logical goal, saying China’s 0.5% limit is “crazy.” He also pointed out it’s more expensive to reduce mixed-paper contamination from 2% to 0.5% at MRFs than it is at mills, where it’s an automated process.

“Very few people think they can make a 0.5% prohibitives economically from residential mixed paper,” he said.

Moore thinks more mills will want long-term contracts for mixed paper that’s clean and has a consistent OCC content, so they can secure a steady supply of fiber with a prohibitives level their mills were designed for. What’s more, because consumers are buying more products online, they’re recycling more boxes at home, which is increasing the OCC in the mixed-paper stream. That makes the mixed-paper bales more attractive to paperboard mills, according to Moore’s presentation.

In addition, Moore said there won’t be enough OCC to meet the future demand. That means mills will look elsewhere for sources of recovered fiber, including mixed paper.

And Mills are working already to consume more mixed paper. According to his presentation, in 2018, the amount consumed by U.S. mills was up 2% over the year before. And in January and February, the usage was up  4.4% over the same period in 2018.

Additionally, board mills under construction in the U.S. are currently planning to use some amount of mixed paper; many of them were originally conceived as taking in OCC only, Moore noted, but have since planned on installing front-end systems for taking in mixed paper. Bio Pappel, Cascades, Copamex, Green Bay Packaging and Nine Dragons are all installing – or have already installed – mixed-paper processing systems.

Pratt Industries is a longtime major consumer of mixed paper. The company uses it in its containerboard at up to 50%. Pratt is building a mill in Ohio that will consume up to 425,000 tons per year of recovered fiber, about half of which will be mixed paper.

Overall, new projects are underway for mills that will consume about a million tons per year of mixed paper. But Moore estimates that’s only about half of the collected mixed paper that will need a home.

Further, he noted that it takes years to bring a planned mill to fruition, and it’s a major capital expenditure. He estimated the total cost to install a 500-ton-per-day stock-preparation system for mixed paper at an existing mill at $20 million, including land, buildings, engineering, design, equipment and installation.

That means 2019 will likely be an ugly year for operators looking to sell the material at decent prices.

“The mixed-paper market is going to start to slowly recover as these new projects come on … over one and two years, but it’s really going to take three to four to five years to get full recovery and get that demand for mixed paper in line with the oversupply,” Moore said.