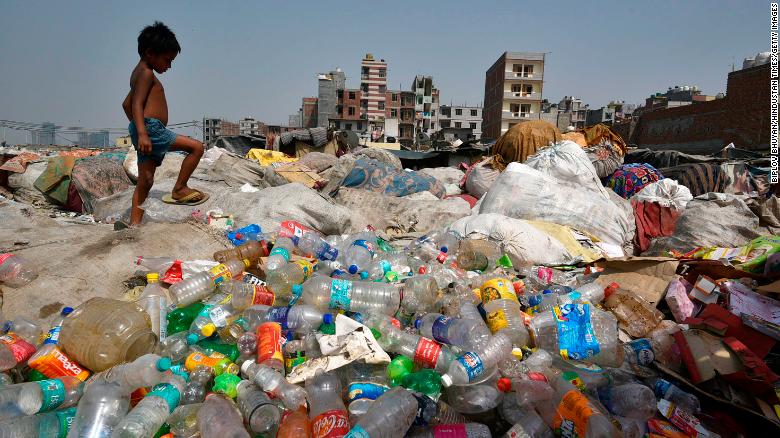 New Delhi (CNN)Ravidas in New Delhi is a slum like no other.

Its alleys are spotless, its drains regularly washed down with water and its houses painted in bright crayon colors and decorated with plants.
There are no fetid open sewers brimming with human waste. Piles of trash do not line every alley. The residents of this proud community run a tight, environmentally conscious ship.
“Everyone is working together to keep it clean because this is where they live,” said Kishwar Jahan, 60, the self-appointed leader of this 350-person slum in the east of the Indian capital.
“If you walk further down from our house it is dirty because people are not responsible enough,” she said.
India consumed an estimated 15.5 million tons of plastic in 2016-17, according to PlastIndia Foundation, an organization of major associations and institutions connected with plastic. That number is predicted to increase to 20 million tons by 2019-20.
While one of Jahan’s four sons gives a goat a soapy bath nearby, a man walks past carrying a basket of plastic and other household waste. The plastic will be removed from the community, but residents have few good options for where it ends up.
There is no processing of waste in most Indian cities, according to the Central Pollution Board, and in some cases, trash is simply burned in open dump yards on the main highway.
Most likely, what is collected in Ravidas will end up on one of the huge landfills around New Delhi, where non-biodegradable materials mix with recyclable plastics — a mounting symbol of India’s trash turmoil.

In the east of New Delhi, the Ghazipur trash dump is reportedly just months away from rising higher than the Taj Mahal, an immense, 73-meter-tall (240 feet) white, marble mausoleum.
In India, about 70% of the plastic the country consumes is simply discarded. Large amounts end up in the water by way of the River Ganges, which comes second only to China’s Yangtze in the amount of plastic it contributed to the world’s oceans, according to a 2017 study.
But the Ghazipur dump is not a one off — it is just New Delhi’s biggest example.
In the north of the city, the Bhalswa landfill greets drivers entering New Delhi from the north.
At Bhalswa, a steady flow of jeeps zigzag up the trash heap dumping their garbage, as hawks circle overhead. Fires caused by the release of methane gas sporadically break out and can take days to contain, all while men, women and children sift through the rubbish looking for items to sell.
Lokesh, 40, who goes by one name, is part of this economy. In his truck, he collects sacks made from plastic from the Bhalswa landfill and sells it to nearby factories, which turn the material back into other sacks or slippers. He’s worked here for the past four years and, while it’s more lucrative than his former job as a cement truck driver, he said he wants to quit.
“When they take it to the factories they burn it to melt it down and then the smoke comes out so pollution comes (out),” he said. “I want to stop because of the pollution it causes.”
Throughout India, there is an army of informal sector workers, like Lokesh, who make their living from recycling. Priti Mahesh, chief program co-ordinator at Toxics Link, a New Delhi-based NGO working for environmental justice, said their presence is a “challenge and a blessing.”
Their work means that a lot of plastic is saved from landfill, but it also lulls the public into a false sense of security around plastic consumption, she said. The informal recycling industry is also unregulated leading to concerns over best practices and plastic contamination at recycling plants.

The end of plastic menace

On World Environment Day 2018, Indian Prime Minister Narendra Modi pledged to phase out single-use plastic by 2022. It was enough for India’s Environment Minister Harsh Vardhan to declare: “It is the beginning of the end of plastic menace.”
But a year later, experts aren’t so sure Modi is going to be able to fulfill his promise.
Of India’s 29 states and seven union territories, about 17 have implemented some form of single-use plastic ban or reduction, according to government figures. While bans on plastic bags and fines seem to be working in some areas, in others single-use plastic bags and items are still widely used — often because of a lack of alternatives, Mahesh said.
Furthermore, the government is grappling with a lack of information on this issue.
State pollution boards throughout the country are required to file information about the type and quantity of plastic waste in their region. But only 14 of India’s 35 regional pollution boards filed information on plastic waste generation in 2017-18.
“Most states have no information on what is happening or where it is happening,” said Mahesh.
The Ministry of Environment, Forests and Climate Change did not reply to requests for comment.
Meanwhile, Mahesh said there is a “huge change in consumer behavior which is resulting in more single-use plastics,” as India’s middle class swells and spends its disposable income on online shopping and fast food.
Environmentalists say that rather than just focusing on recycling, governments need to work on reducing the amount of plastic being produced. That will mean getting the plastics industry on side, which will be a difficult task — India’s packaging industry is worth $32 billion, employing one million people nationwide and growing.

Waking up to plastic reality

Public awareness around the issue of plastics, however, does seem to be growing — perhaps because trash is becoming such a global issue. China produces 50 million tons of plastic waste each year and the United States generated 34.5 million tons of plastic in 2015.
From dramatic beach clean-ups in Mumbai to plastic recycling vending machines in Delhi, and public initiatives like Modi’s Clean India campaign, plastic waste is becoming more of a public concern. The #Jholachallenge is a government campaign to get citizens to ditch their plastic bags in favor of cloth totes, as part of the government’s Swacch Survekshan 2019, an annual survey of how clean towns and cities across India are.
One school in the country’s northeastern state of Assam has reportedly rolled out a scheme where kids pay for their school fees by bringing in plastic waste. And there are a plethora of start-ups using innovative means to recycle plastic materials or cut down on waste.
While these are steps in the right direction, environmentalists say that without government standardization in recycling systems and greater industry efforts to reduce plastic consumption and production, change will not come.
“Plastic has gotten into us much more deeply than we realize and accept. There has to be a major breakthrough for us to get rid of this crisis,” said Mahesh.
In Ravidas slum, Jahan said she considers the challenge of shifting people’s attitudes towards their trash habits her purpose in life.
“There are all kinds of people,” she said. “Some will not care at all. ‘If it’s there, let it be there,’ they say.”
But Jahan will continue to try to change their mind.